Along with her film: ”The Man in the Background” and publication: Encounter: ”Gentlemen & Arseholes”, the artist and filmmaker Lene Berg (NO, 1965) will give us an insight in the centerpiece of an American secret program of cultural propaganda in Western Europe, funded by the CIA: The Congress for Cultural Freedom (CCF), founded in West-Berlin in 1950. ”The Man in the Background” focuses on the CCF and the role and fate of its director Michael Josselson. ”Gentlemen & Arseholes” is a reprint of one of the undertakings of the CCF: the cultural journal Encounter.

Carola Hein (DE, 1964) is professor and head of the History of Architecture and Urban Planning Chair at Delft University of Technology. She will talk about the urban design competition Hauptstadt Berlin (1957-58) and its counter competition (1959) as cultural instruments in Cold War politics. In 1990 Carola Hein curated the exhibition Hauptstadt Berlin at the Berlinische Galerie and is the main author of the accompanying publication.

Through a lecture-performance by the artist Elian Somers (NL, 1975) we will get to know her film in progress ”A Stone from the Moon – Ecumenopolis” through which she extrapolates the Hauptstadt Berlin urbanism to a worldwide scale. Ecumenopolis is a blueprint for a world- encompassing city of the future invented by the Greek architect and urban planner Constantinos Doxiadis (1913-1975). The film gives various perspectives on Doxiadis’ extensive research network, his theory of Ekistics and its ultimate manifestation Ecumenopolis, in and outside the context of the Cultural Cold War. 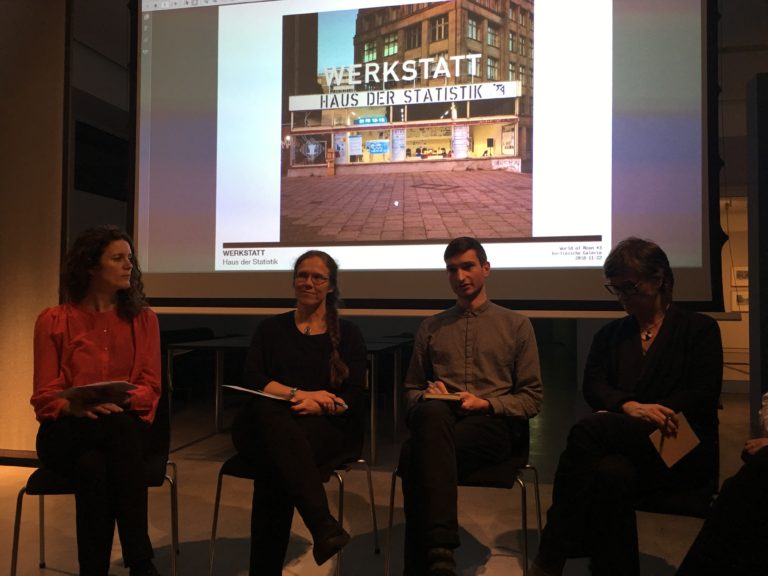 Guiding us in this discussion on understanding the present is Clemens Weise (DE) from the Werkstatt Haus der Statistik and Olesia Vitiuk (RU, 1993 ), curator and project- coordinator of the project “Rethink open-form: 60s / 70s residential areas as settlements for micro-democracies” from ZK/U – Center for Art and Urbanistics (Berlin). Vitiuk will give us an insight on the first steps of the team research, which examines residential areas designed in the 60s and 70s, with a focus on the status quo of the Karl- Marx-Allee (section II) in Berlin.

This event is generously is funded by Senate Department for Culture and Europe in Berlin. The The project "A Stone from the Moon – Ecumenopolis" is generously supported by Mondriaan Fund Amsterdam and CBK Rotterdam (NL). Photographs by Aleksander Komarov.